Born in Cologne in Germany. Michel Noll lives in France since more than 40 years. After completing his studies in Economics and Sociology at Cologne University in Germany, he became a Producer/Director of television programs. In 1977, he joined TELECIP in Paris, then the leading French independent production company. In 1982, he launched REVCOM TELEVISION, the television arm of French Publishing Group ‘Editions Mondiales’ which quickly became the most successful and international of French production companies, with subsidiaries in Germany, United Kingdom and Australia. In 1987 he launched his own production house QUARTIER LATIN. In 1995, he acquired ICTV a distribution company representing small French and international producers. So far, he directed and/or produced highend programs and features. In recent years, he directs and/or produces documentaries with a cutting edge in contemporary history, current affairs and social issues. 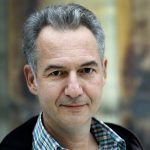 Born in 1970 in Thessaloniki, Greece. Studied film and video in the UK at West Surrey College of Art & Design. He has collaborated in many of Greece’s public television (ERT) documentary series. His work is focused on “common people’s” stories, filmed in an observational mode in films such as “National garden”(2009) and “Next Stop: Utopia” (2015), both of which have received awards and distribution in international festivals. He has been involved in audiovisual presentations projects of large scale (Greek pavilion at Shanghai expo 2010).He is an assistant professor at the School of Film Studies of Aristotle University of Thessaloniki, teaching editing and documentary since 2006 and the main author of the handbook for young documentary filmmakers.

BA (Honrs) Communication and Image Studies of University of Kent MA Heritage Management, Athens University of Economics and University of Kent. She works as a director in ERT SA since 1998 mainly in documentaries and broadcasts relating to social, cultural and children’s issues and in international co-productions. She has also worked in the field of promotion and branding heritage both within the ERT, but also in the private sector. She’s been a jury member of the ERT MICROFILM program. In May 2015 she published her first children’s book titled vice versa from MINOAS versions. Two of her documentaries have been screened at Documentary Festival Kalamata Thessaloniki Documentary Festival.