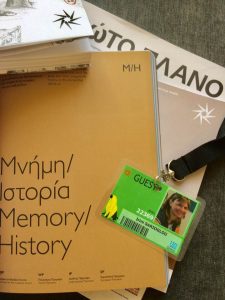 On March 6 2019, the General Secretary of the Hellenic History Foundation (IDISME)

and Art Director of Beyond Borders

about the new history documentary of IDISME

“The East Has Set” directed by Alexandros Papaeliou.

The film is participating in the Official Programme

of the 21st Thessaloniki Documentary Festival.