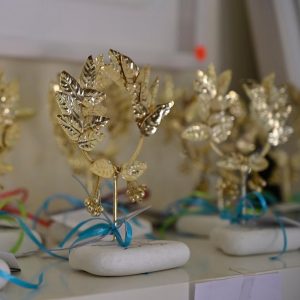 “The Silence of Others” by Almudena Carracedo and Robert Bahar

This film stood head and shoulders above the competition in the sophistication and gravitas
of its storytelling. It brings to light the decision by the post-Franco Spanish government to
enact an amnesty law preventing justice being applied to the political actions of the Franco
regime while in power. The focus on the campaign for justice for victims of the Civil War and
its aftermath locates the historical analysis in individual stories of pain, suffering and
resolute determination, revealing a society traumatized and unable to speak until now. The
characters and the integrity of their stories, as they fight this “Pact of Forgetting” to find
justice for wrongs committed during Franco’s 40 year rule of bloodshed, immerse and
compel the viewer from start to finish. The silent sculptures looking out into the mountains
become a powerful metaphor for both the survivors and those murdered during the
dictatorship in the film.
This is outstanding filmmaking that finally tells the story of Franco’s victims in a way that has
not previously been achieved. The issue could be compared to Greek experience: after the
German occupation and the civil war, not only were the Nazi cooperators not punished,
they remained executives of the state mechanism until the end of the 1970s.
This film delivers lessons for authorities everywhere – those who bury crimes and protect
the criminals who live on. A compelling, deeply moving and very important film.

The revelation of another dark chapter of recent European colonial history air-brushed from
the record: two and quarter million Algerians displaced by the French in their fight against
the FLN during the Algerian War of Independence (1954 to 1962).
‘To all those who know their history only through silence’ is the caption at the end of this
film, but the filmmaker, yet another young woman who returns to her homeland with her
father, succeeds in giving a voice to those who lived through the war in Mansourah, a
resettlement camp that becomes a topos of memory. In a series of moving vignettes we
slowly piece together what happened in the village of her father through the individual
testimonies of the living who played their part in resisting the oppressors, and which
underscores the way in which memories have been repressed in subsequent generations in
both France and Algeria remaining ignorant.
An accomplished and imaginative structural assembly of imagery and testimony, a small
treasure of an almost-lost history demonstrating that the experiences of violence and death
remain always with the survivors.

“Children Below Deck” by Bettina Henkel

A beautifully constructed and utterly compelling documentary. It shows how important it is
for us to face the stories of our wartime enemies in order to understand history, just as it is
vital for those perpetrators and collaborators to face their own past, via their own role in it
(remember Nuit et Broulliard ?).
This film does just that. It is a complex and nuanced investigation of inherited trauma that
demonstrates how the unresolved legacies of World War II and its aftermath continue to
warp one family’s relations. Using valuable archive, the protagonists journey to their roots
and past in Latvia, Sweden and Poland. This is a brave and very personal investigation of
family secrets and traumas among three generations of Baltic Germans through two world
wars and the movement of populations in that time. A father and his daughter (Bettina
Henkel the filmmaker) face the past. As she searches for knowledge, understanding and
reconciliation, conflict with her father is never far away, nor is the release of unresolved
pain.
The film builds into something complex and emotional as it unflinchingly uncovers a difficult
relationship between a mother and son, and how the choices this Baltic German family
made during WWII affected their lives. This accomplished and revealing film is also a
valuable study of the trauma and impact of guilt passed down through the generations
during these conflicted times.

An intelligent, well observed exploration of the lives of people living in remote desert
refugee camps in northwest Africa. They are still there forty years after Morocco expelled
them from their home in the Western Sahara. This film focusses on a young group of
friends, and it evidences great trust between filmmaker and subjects. Beautifully shot and
with compelling characters, this cinematic tale has some of the qualities of drama, also
humour. It avoids a frequent tendency to objectivise or pity.
Drawing on reality television technique, it provides a portrait of young Sahrawis whose daily
lives, gossip, ambitions, obsessions and frustrations are instantly recognisable and relatable.
As well touching on the context – the geography, history and politics – the film brings to its
audience an empathy and understanding of the culture and institutions of this isolated
community, including gender attitudes and relationships, desires and needs, and the more
quotidian dramas – hanging out with friends, the medical services, learning to drive, finding
a job, playing volleyball – even the remote connections with their long-lost homeland. The
film develops new strategies to document a refugee crisis – using close-up empathy, vitality
and humanity. A life-affirming and valuable insight.

“Time to Leave” by Orhan Tekeoglu

A deeply philosophical record of the mourning, loss and sometimes destructive impact of
tradition. This film stays with you long after it has finished. It has a cinematic purity of
storytelling in a simple tale of a father grieving for his son, and in the rhythms of nature – of
working within it. The father Hassan’s rebuilding of his old wooden house in memory of a
dead son that he shunned for shaming the family, takes on a religious quality – a ritual of
penance that facilitates atonement and a sense of peace. Each beautifully shot frame is full
of exquisite detail that slowly unfold as a portrait of grief and guilt in a way that moved and
touched us all deeply. We eagerly look forward to this filmmaker’s next film.
* * *

Beyond Borders Jury
Edited and compiled by Nick Torrens, president