The films competing in the 5th Kastellorizo ​​International Documentary Festival

A total of 24 documentaries (18 feature / medium and 6 short) from 18 different countries will be presented in the Competition Program of the 5th Kastellorizo ​​International Documentary Festival "Beyond Borders", which will take place from 23 to 30 August on the island.

For another year, the official program of the Festival includes remarkable samples of cinematic art from all over the world and Greece.

In particular, the documentaries of the Competition Program are the following:

Y1-In the silence of the Bottom// Filippos Vardakas, Greece, 2019, 93 ’
Summary: 14.09.1943: The legendary Submarine "Y1-L. Katsonis "is sunk north of Skiathos by a German Anti-Submarine. The narration through the book of the Existent Elias Tsoukalas that was saved by swimming for 9 hours to the shores of the island, secret documents, diaries of the crew members is the thread that unfolds the human stories that are woven around the submarine. 75 years later, with the support of the Navy, we look for the submarine sunk at 253 m and film it for the first time.

In my Blood it Runs// Maya Newell, Australia, 85 ’
Synopsis: Ten-year-old Dujuan is a child therapist, a good hunter and speaks three languages. As he shares his wisdom about history and the complex world around him, we see his spark and intelligence. However, Dujuan is "failing" at school and is facing increasing control from social security and the police. As he dangerously approaches prison, his family struggles to give him a strong education at the Arrernte in parallel with his western education, so that no more statistics become available. We follow him on his path as he struggles with these pressures, shares his truths and somewhere in between finds space to dream, to imagine and to hope for his future self.

Princes among men// Stephan Crasneanscki, France, 2017, 84 ’
Summary: After the upheavals on the Danube, we meet the Roma, this numerous minority in Europe. Princes Among Men is an ode to the culture of the Roma ethnic group, inextricably linked to music, ideas of freedom and an uncontrollable thirst for life.

Ο Γιώργος του Κέδρου// Giannis Kolozis, Greece, 2020, 82 ’
Synopsis: A personal journey through time through the eyes of two generations of filmmakers, on the island of Donoussa from the 70's until today. George Kolozis went to Donoussa for the first time in 1972, there was no electricity or tourism on the island then. Living alone on the beach of Kedros, he acquired the name "George of Kedros". His death in 2009 led his son John to continue his work, creating a story in which time is treated as a revision of the present moment.

Marceline, The best Clown in the World// Germán Roda, Spain, 2020, 80 ’
Synopsis: Marcelino Orbés, born in Jaca (Spain), was the best clown in the world from 1900 to 1914, triumphing in London and New York, the largest entertainment industry of the time. He was a clown, acrobat and comedian admired by Charles Chaplin and considered the best in the world by Buster Keato.

The Kiosk// Alexandra Pianelli, France, 2020, 78 ’
Synopsis: In "Kiosk", Alexandra, a young artist, uses her mobile phone to film the days she spent helping her mother at the kiosk that the family maintained as a franchise in a luxurious square in Paris. The director has fun playing the role of the shopkeeper, discovering the trade and joking with clients and fellow traders. Inside this tiny capsule, Alexandra designs and films the world as she progresses. But the printing industry is collapsing and its little game is less fun than expected.

The Labyrinth// Dimitris Athanitis, Greece, 75 ’
Summary: In the heart of Athens there is another city. A city that has lived for more than a century, under the artificial light of neon. A documentary about the galleries in the city center and the people who live and create there for more than two and three generations. The past, present and future of a particular microcosm.

Once more unto the breach// Federico Ferrone, Michele Manzolini, Italy, 2019, 70 ’
Synopsis: An Italian soldier, born to a Russian mother, is called to the Eastern Front. As a Russian speaker, he is one of the few Italian soldiers who can communicate with the prisoners of the enemy camp and the local population. The horrors of war and the ghosts of a hostile land haunt him and it is clear that the "easy" victory was merely an illusion. In one last desperate attempt to escape his fate, he decides to give up. Like thousands of other soldiers, his body will disappear in the winter frost of Ukraine. Seventy years later, the same places are again a scene of war, destruction and death.

Mirador// Antón Terni, Uruguay, 70’
Synopsis: Pablo lives in a secluded area of ​​Uruguay, in the heart of a wild landscape. An improvised distillery, the old tape recorder where he records poems and his two inseparable friends, Oscar and Valeria, are all the company he needs. As the lens lovingly embraces the adventures of their daily lives, one - not exactly insignificant - detail goes almost unnoticed: they are all three blind. A tender journey that reminds us that the eyes find a way to see even in the darkest darkness. A low-key elegy on the refreshing forces of friendship and companionship, which illuminate the path of life.

Silence Pisces // Andreas Loukakos, Thodoris Chondrogiannos, Greece, 2020, 70 ’
Summary: Although the EU has set an end to overfishing by 2020, the Mediterranean is the most overfished sea on the planet and fishermen's fish are dramatically impoverished in a time of climate change. The feature-length documentary "Silence Pisces" traveled from one end of the Mediterranean to the other, capturing the lives of fishermen who, due to failed EU and national policies, are in danger of becoming an "endangered species" on the shores of human civilization. his first steps thousands of years ago.

The New Plastic Road // Angelos Tsaousis & Myrto Papadopoulou, Greece-Germany, 2019,66 ’
Synopsis: After the opening of the China-Tajikistan border and the reconstruction of the Silk Road, Davlat, a Tajik merchant father of three, was able to make a living from the Chinese trade. As the child of the first truck driver and merchant in the area, he has managed to improve the quality of both his personal life and that of his relatives.

1944// Fatima Osmanova, Ukraine, 2019, 62’
Summary: In 1944 the Crimean Tatars experienced exile, which was accompanied by famine, disease and loss. In the early years of the exile, almost half of the displaced Crimean Tatars died. But those who survived, dreamed of only one thing - to return to the Crimea.

Cerro Quemado// Juan Pablo Ruiz, Argentina, 2019, 62 ’
Synopsis: Cerro Quemado is the portrait of three women of coya genealogy, an image of three women reunited in the ancestral land where they were born. It is about the journey of Micaela Chauque and her mother in search of Micaela's grandmother, the last settler in the desert region of northern Argentina. The long and difficult journey of these two women, through hills and valleys, leads to a moving and sensitive encounter with the old woman whose persistent roots turned her into a hermit.

Spyros and the Round of Death // Dimitris Kafidas & Lino Kafidas, Greece-Belgium, 2020, 56 ’
Synopsis: Spyros, a Death Round acrobat, lives a nomadic life with his family, his caravan and some acrobats who often leave him. His father was a Gyros legend, his grandfather, uncle and brother were also well known names. Will he manage to save a 50-year-old family tradition and a dying profession? Will he be the last or will his sons continue? The human portrait of an old acrobat in a rapidly changing world.

Mother Tongue // Shai Alexandroni, Israel, 2018, 56 ’
Synopsis: Four women in their 60s talk about their strained relationships with their outgoing mothers. Their stories also include power relations in the family and in their children.

The Abode. Who are we? // Eleonora Tukhareli, Russia, 2019, 54 ’
Summary: Solovetsky Monastery was built in the 15th century. It is a sacred place, in the history of which holiness and tragedy, unity with God and the terrible challenges of the "special purpose" camp were combined. In this part, everyone is looking for an answer to the fundamental question "who am I". The main character of the film goes there to shoot his documentary, and everything starts to go wrong.

Lessons in Humanity// Branko Istvancic, Croatia, 2019, 53 ’
Synopsis: Croatian veterans from Pakrac, in collaboration with the medical staff of Pakrac Hospital, rescued about 300 patients from certain death in a humanitarian evacuation on the afternoon of September 29, 1991. Most of the 300 patients were Serbs from the psychiatric ward. . The people who participated in the evacuation were awarded the Office of the Heroes of Humanity. The film is based on the book of the same title by Veljko Djordjevic.

Vostok N°20// Elisabeth Silveiro, France, 2018, 49 ’
Synopsis: In the midst of suffering, sharing meals, boredom, and confessing to strangers, people spend as much time as they can on wagon number 20 of the Trans-Siberian train. In the form of literary contrast, the emotions of the passengers are illuminated: their loneliness and their desire for freedom and love.

Then comes the evening // Maja Novaković, Serbia, 2019, 27 ’
Synopsis: The documentary chronicles the bittersweet life of two grandmothers living isolated in the hills of eastern Bosnia. Nature is the entity with which they speak, listen and respect. Intangible cultural heritage is emphasized through psalms and ceremonies to counteract adverse weather, hail and storm.

The Expert// Carlota Coronado, Clara Roca, Spain, 2019, 23 ’
Summary: Everything is born with an enigma. An enigma with a very simple answer, but for many people the answer is not so obvious. Why;

Uzzi// Ido Weisman, Israel, 2018, 21 ’
Synopsis: At the age of 94, Professor Uzzi Ornan continues his lifelong struggle to defend the secular and democratic image of the State of Israel. His last attempt is to secure Civil Burial rights in the state in which he lives.

Hopeless// Zehra Yiğit, Turkey, 2020, 18 ’
Synopsis: The film focuses on unemployed Afghan immigrants living illegally in the Turkish holiday paradise of Antalya. The characters are between 15 and 25 years old and all work to recycle paper and plastics. As they clean the city and participate in the recycling of waste, they themselves are considered "waste" of paradise. They are trying to save money from recycling and send some to Afghanistan where their families live. Meanwhile, they live as a family on the outskirts of the city. They gather at home, eat together and sometimes play cricket on the weekends.

Blessings and Curses // Katerina Zacharia, USA, 2018, 15 ’
Synopsis: A short documentary about the 79-year-old Mrs. Metaxia Anaplioti who kept her vow for 49 years, lighting the candle of the 11th century Byzantine church of Agios Theodoros in Vamvaka, Mani. The repetition of this ritual contributes both to the sense of the personal identity of Mrs. Metaxia, and to the sense of the collective identity of the village, while at the same time the film makes an appeal for the preservation of the cultural heritage of the village.

The story of Giannis // Voula Germanakou Kopsini, Germany-Greece, 2019, 14 ’
Synopsis: John was a Pontian refugee from the Crimea who arrived in Piraeus in 1919. Seen through the eyes of his great-granddaughter, the film, like a personal diary, follows the journey of his life where historical events are intertwined in the notes of its owner, while he himself without realizing it is part of the recent history of Greece and the refugee issue.ος. 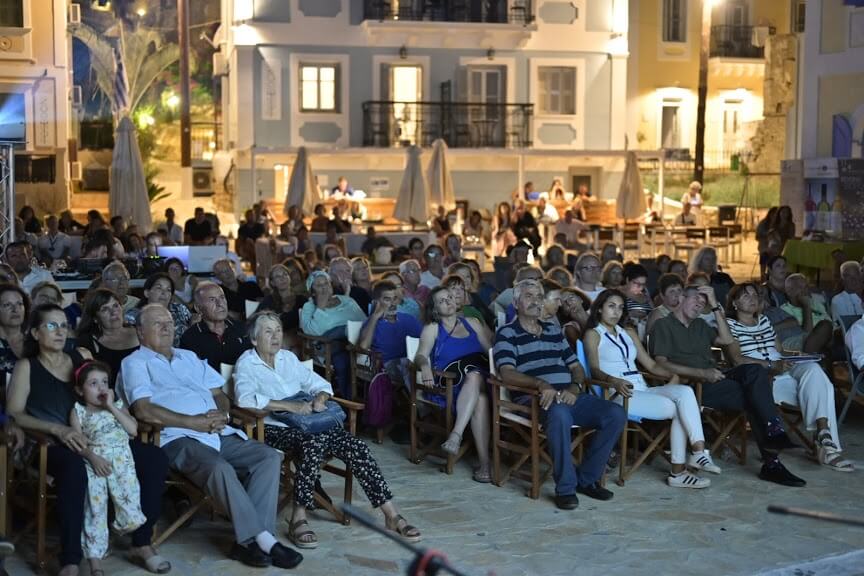 The Festival is organized by the Hellenic Foundation for Historical Studies (IDISME), together with the Ecrans des Mondes (Paris) and the Kastellorizo ​​Revival Association (Sydney), under the auspices of the General Secretariat of Hellenes Abroad (MFA), Municipality of Megisti, the Embassies of Australia, the USA and Israel as well as with the kind support of the Greek Parliament, the General Secretariat for Island Policy, the Ministry of Culture and Sports, ERT and EKOME.

For more information you can visit the website www.beyondborders.gr or contact the Festival at This email address is being protected from spambots. You need JavaScript enabled to view it.