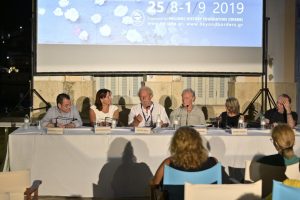 Fourth day of the International Festival "Beyond the borders"

The fourth day of the festival began with the International Discussion Panel on Political Disobedience.

The chairman of the panel was Michel Noll, while Nick Torrens, Mandy Chang, Panagiotis Tsolias, Ed Braman and Irini Sarioglou participated in it. The first screening of the night was "Mia zoi" (Greece, 80΄) by Dinos Giotis and was followed by a discussion with the director. Svetlana Muzychenko's "The Greek of the Russian Empire" (Russia, 80΄) and Betina Henkel's "Children Below Deck" (Austria, 90΄) were screened. At the same time, the night sky was observed and Uranography was done by the National Observatory.