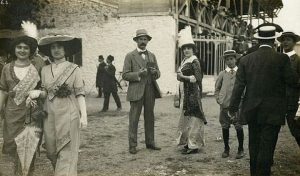 Press Release: Book and Documentary about the Asia Minor Catastrophe

The Hellenic History Foundation (IDISME) and the Cultural Foundation of JUADN

at the War Museum of Athens (Ioannis Kapodistrias Amphitheatre)

“The Asia Minor Campaign by Kostas Missaelidis.
His Correspondences from the Front (1919-1922)“

The event will include a screening of the history documentary

“The East Has Set”

Nearly a century after the Asia Minor Catastrophe,

one of the biggest tragedies of the 20th century, IDISME

with the support of the Cultural Foundation of JUADN

undertook the publication of the archives

of the 21st Thessaloniki Documentary Festival.

The film was written and directed by Alexandros Papaeliou.

or with an e-mail to rg.emsidi@ofni>.

A press conference about the event will take place at 12:00 p.m.