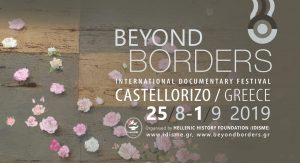 Record of participation in the 4th Kastellorizo ​​Festival "Beyond Borders"

Record of participation in the 4th Kastellorizo ​​Festival "Beyond Borders"

The deadline for submitting entries to the 4th Kastellorizo ​​International Documentary Festival "Beyond the Borders" ended on Wednesday, May 15, exceeding all the expectations of the organizers.

The participations, Greek and international, exceeded 400 in number.

The documentary films that will qualify to take part in the competition program of "Beyond the Borders" 2019 will be announced in June. The qualifying committee consists of: Christos Simatos (photographer), Vassia Hatzigiannaki (director), Costas Follas (director), Tassos Giapoutzis (director) and George Mantas (editor-director).

A few words about the Kastellorizo ​​Festival

The Kastellorizo ​​Festival "Beyond the Borders", which is organized by the Hellenic Foundation for Historical Studies (IDISME) with the support of Ecrans des Mondes (Paris), the Revival Association of Kastellorizo, Sydney and the Municipality of Megisti under the auspices of the Ministry of Foreign Affairs, offers every year to the Greek, European and international public a selection of documentaries (themes) with thematic axes History and Society. The aim of this "eclectic" Documentary Festival is to honor remarkable examples of cinematic art and storytelling, which deal with events, issues and people who have influenced the countries, peoples and cultures of the world.

The Festival takes place every year in the last week of August on the edge of the Aegean, in the idyllic Kastellorizo, an island of incomparable natural beauty. Every year "Beyond the Borders" organizes a variety of parallel cultural activities on the island, offering a great celebration of culture and cinema to the permanent residents and visitors of the island.

Watch here the short film with snapshots from the 3rd "Beyond the Borders" 2018: https://youtu.be/IgFALUx_uR8

For more information you can visit the website: www.beyondborders.gr

To contact the Festival you can send an e-mail to: This email address is being protected from spambots. You need JavaScript enabled to view it..