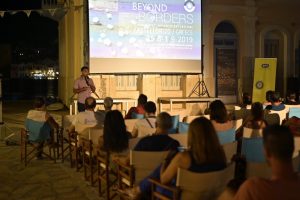 Second day of the International Documentary Festival "Beyond Borders"

On the second day of the Festival, the competition part of the event started with the screening of four films.

Initially, "Second Chance" (Greece, 62 ΄) by Menelaos Karamaggiolis was screened and a discussion with the director followed. Then the documentary "February 27th" (Belgium, 43΄) by Marie-Therese Jakoubek was screened in a nationwide premiere, which is part of the tribute "Minorities, Roma, Intercultural Education". Also screened were the documentaries "The Silence of Others" (USA, Spain, 96΄) by Robert Bahar and Almudenna Carracedo and "The Golden Heralds" (Cuba, 23΄) by Louis-Alejandro Yero. At the same time, fairy tales and the myths of Aesop were narrated by the storyteller Dimitris Avouris. Earlier, a short narration of part of the adventures of Odysseus was made by the theatrical theatrical Susanna Kardoulia in the context of the preparation of the children's theatrical performance. In the morning, Regina Katsimardou and Panagiota Panariti from the National History Museum created constructions with the children of Kastellorizo ​​with themes inspired by the history of Kastellorizo. The introductory swimming lesson was also given by Roberto Kalic.