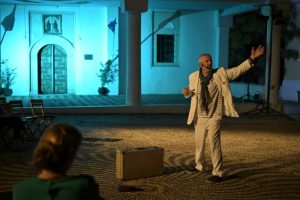 Seventh day of the International Documentary Festival "Across Borders"

On Saturday, August 31, 2019, the competition part of the festival ended with the screening of two films.

Initially, the film "I Itsai Romni (The Girl Woman)" (Greece, 53΄) by Evangelia Goula, after which there was a discussion with the director. The next screening was "Hamada" (Sweden, Norway, Germany, 89΄) by Eloy Dominguez Seren. Earlier, within the framework of the festival, the speech "Mouth the mirror of health" was given by the president of the Dental Association of Dodecanese Nikos Diakogeorgiou. The evening ended with the theatrical performance "Nostos, the return of Odysseus", a theatrical monologue with Aris Lebesopoulos directed by Theodoros Gonis and sets, lighting and music by Andreas Georgiadis.