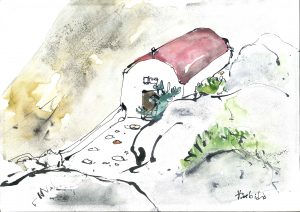 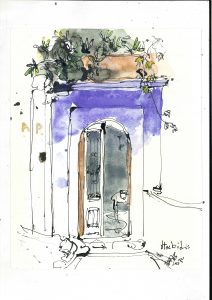 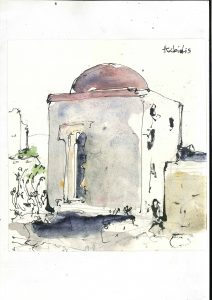 Pavlos Habidis was born in Thessaloniki, Greece, in 1957. At the age of 18 he left to study in Sweden, where he graduated from Lund University with a B.A. in Philoso-phy and History of Art. While studying he also attended courses in different engraving techniques. His very first exhibitions featured Chinese ink drawings; he also worked for the daily press as a cartoonist. From 1981 to 1984 he traveled around Europe extensively, and for extended periods he lived in what was then West Berlin, where the everyday life and dynamic artistic climate had a crucial influence on both his aesthetics and his general artistic orientation. Since 1985 he has dedicated himself to painting and lives exclusively from his art. Up until 2001 heled a “nomadic” life and lived – while creating and exhibiting his works – in Tokyo, Geneva, Paris, and Brussels. At the same time, he created covers for literary works and had his drawings published in political and literary reviews, as well as in strip cartoons in Germany, Greece and France. Since 2001 he has lived in Athens and Brussels. Several exhibitions of his paintings have also been held in Athens, Thessaloniki, Berlin, Bologna, Copenhagen, and Stockholm. His works can be found in private collections, cultural foundations, and museums.