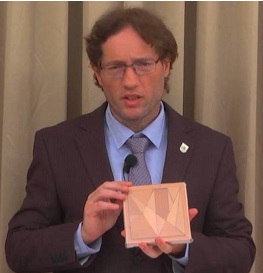 “Ostomachion: An encounter with the oldest puzzle in human history” by Dr Pantazis Houlis.

He was raised in Castellorizo island. He studied Mathematics at the University of Crete (Greece). He completed his postgraduate studies at the University of Western Australia Masters in Algebraic Graph Theory (Mathematics), PhD in Control Systems (Electrical and Electronic Engineering). Associate Professor at the University of Western Australia up to 2012, holds an extensive collection of 4,000 puzzles, 700 of which are his own inventions and prototypes. Known in the puzzle community with many distinctions, he has been a member of the IPP (International Puzzle Party) for several years. A co-founder of MaxxBrain, he is chief of R&D. The aim of MaxxBrain is to introduce mathematical puzzles in education to facilitate the learning of students. MaxxBrain cooperates with several state governments of India and will shortly expand operation to the rest of Asia.